BUFFERING – A compound (eg. Calcium Carbonate) is added to paper at the pulp stage that neutralises acid, which might be generated from natural aging or from atmospheric conditions. Buffering will normally raise the PH to a level of 8.5.

COLD PRESSED – An intermediate surface, the medium surface between rough and hot pressed.

CELLULOSE – The chief constituent of the cell walls of all plants. All plants contain tissue that, when correctly processed, will yield cellulose.

COTTON LINTERS – The fibres used as the raw material to produce pulp for cotton content papers.

CHEMICAL PULP – Pulp that has been extracted from wood by chemical means as opposed to mechanical techniques. Components such as lignin, which are not capable of withstanding chemical attack and tend to oxidize, have been eliminated.

CYLINDER MOULD MACHINE – A paper making machine in which a wire covered cylinder rotates partly submerged in a vat containing pulp. The sheet is formed on the outside of the wire with the water draining through. The paper is lifted from the wire by means of a continuous felt. Not as common as the fourdrinier machine, the cylinder machine is slower but produces a stronger paper with more bulk. It can produce paper up to 850GSm or more.

DANDY ROLL – A wire cylinder on the fourdrinier machine which makes a wove or laid effect on the texture of the paper as well as a water mark.

DECKLE EDGES – When paper is made by hand, the pulp diluted in water is deposited on a wire mesh and is left to drain. The natural edges of the paper are not cut and remains irregular. The principal is the same for a machine mould made paper. However the deckle edge is formed by a jet stream of water whilst the paper is still wet.

FELT – A woven wool or synthetic felt which conveys the paper through the paper making machine. The pattern on the felt gives the paper a certain grain or surface.

FOURDRINIER MACHINE – The most commonly used machine for making paper. This machine is much faster than a cylinder machine and generally makes paper with a weight less than 450GSM.

GRAIN – The surface of the paper, it is the imprint left by contact with the paper machine felts.

GRAIN DIRECTION – The direction in which the majority of fibres lie in a sheet of paper produced on a Fourdrinier machine. This is determined by the alignment parallel to movement of the paper through the paper machine. Cylinder machine mould papers do not possess a grain direction.

GSM – Grams Per Square Metre. It is the metric measurement of weight for artist papers.

HOT PRESSED – A very smooth surface produced by pressing the paper through hot rollers after the formation of the sheet.

LIGNIN – A component of the cell walls of plants along with cellulose. Lignin is harmful to paper becaue it darkens on exposure to light and is prone to produce peroxides. It can be removed to a large extent during manufacture.

NOT – A Cold Pressed paper (Not Hot Pressed)

OPTICAL BRIGHTENERS – Optical brighteners are used to obtain an artificially bright white paperwhich is not permanent. A permanent paper should be free of Optical Brighteners.

pH – A measure of the hydrogen ions in a solution which is a measure of acidity or alkalinity. A papers pH is measured on a scale of one to fourteen. Seven is neutral. Numbers higher than seven are alkaline and numbers lower are acidic. Papers with a pH of 6.5 to 7.5 are generally considered neutral.

PLY – A single layer of paper. The term is normally used when several sheets of paper are laminated together to form a board.

RAGS – Processed clippings of cotton remnants from the textile industry for use in high quality papers. Not generally used in commercial paper manufacturing because most modern fabrics contain a mixture of cotton and synthetic fibres.

– Generally a paper which contains a minimum of 25% cotton fibres can be considered a Rag Paper.

ROUGH – A heavily textured surface on a paper. Also known as Torchon.

SIZE OR SIZING – A material added or applied to paper to provide resistance to liquid penetration. There are several methods of sizing
Surface Sizing,
Engine Sizing (in the pulp)
Tub Sizing (the paper is submerged in a tub of size).

VELLUM FINISH (WOVE) – A paper that has no laid lines, that can be smooth or grainy. Can also refer to : 1. Calf hide, which is used for the finest parchments. 2. Tracing paper made from cotton pulp.

WATERLEAF – A Paper with little or no sizing.

WATERMARKS – A design applied to the surface of a paper which causes less pulp to be distributed in that area and results in the transfer of the design to the paper. The watermark is applied in different means, depending on the paper machine. On a Fourdrinier machine, the watermark is achieved by a relief design on the dandy roll, leaving an impression. On the cylinder machine the watermark is attached to the wire. Some papers are also marked by a dry stamp after the paper has been produced, thus creating an embossed mark.

WOOD FREE – Generally refers to a chemical wood pulp which contains no lignin. 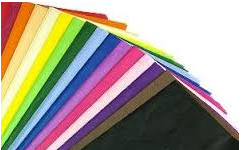