The history of the gel-based ink rollerball pen began over 30 years ago. In the late 1970’s most writing instrument companies started producing a new technology known as the rollerball pen. Rollerball pens used a water-based fluid ink in comparison to the then popular ballpoint pen which used a thick oil-based ink. In Japan, the local market already had several strong rollerball competitors, and there were numerous overseas brands from the U.S. and European markets. The Sakura Color Products Corporation, located in Osaka, Japan, also wanted to develop a rollerball pen, but wanted to advance the technology further. Sakura decided to go after what no other company had been successful in creating – a gel-based ink.
Although there are now many suppliers who offer a variety of gel pen products, Sakura was officially recognized as the first and original inventor of the gel pen. In 2000, Sakura Color Products Corporation, received the Award of Director General of the Japanese Patent Office for the invention of the gel ink roller ball. 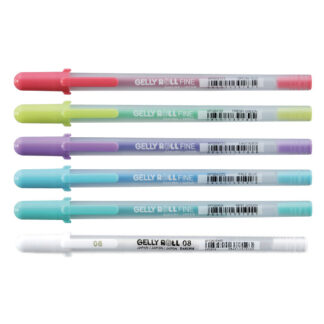